LA Dodgers’ star outfielder Yasiel Puig was arrested yesterday coming of the Alligator Alley for Willful and Wanton Reckless Driving. So far the reports I have located indicate Puig was going 110 in a 70. unless there was more to the driving pattern, that means this is a bad arrest. In Florida, case law dictates that speed alone is insufficient to constitute reckless driving. This case doesn’t even qualify as a 50 over speeding ticket. Maybe later reports will indicate that he was doing something else reckless, otherwise this charge should not hold up.

The retrial of Amanda Knox and Raffaele Sollecito for the murder of Meredith Kercher in Perugia continues. While Knox has not returned to Italy for the retrial, their procedure allows for her to enter a statement through her lawyer. Her attorney read the statement into the record last week, denying that she had anything to do with Kercher’s killing. The trial will continue into early next year. Rudy Guede has separately been tried and convicted of the murder, but prosecutors theorize that Knox and Sollecito were involved. They were tried and convicted, but those convictions overturned, then a retrial ordered, which has been going on for several months. Recent evidentiary developments suggest that DNA does not implicate them in killing.

Weird DUI : Santa Gets a DUI on his Sleigh

Santa and one of his elves were driving a horse-drawn sleigh through a town in Poland, when a car horn spooked their horse and they were thrown from the sleigh. Observers claim claim Santa and the helper were visibly drunk as they rode the sleigh, and authorities are considering charges against Santa for DUI. He was in control of a vehicle while impaired: which could support charges.

Yes, you can be charged in Florida, and probably most US states, for drunk driving a horse-drawn sleigh. Unlike riding a horse, which would not qualify as a vehicle, a sleigh or cart being pulled behind almost certainly would. Everyone be safe out there, the holiday streets haven’t been safe since that reindeer ran over grandma! Merry Christmas!

LCSO did a checkpoint in North Fort Myers this weekend, in which more than 1,200 vehicles passed through. Only 7 of the drivers were arrested fore impairment reasons, plus a few more for other reasons. That’s less than one percent of the drivers who were stopped to be breaking any laws. 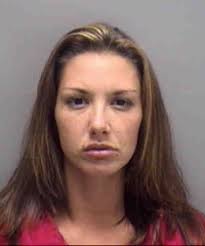 In a case we covered on Crimcourts, Melissa Webb was convicted at trial last month of Second-Degree Murder for killing her ex-boyfriend, Bryan Sorrendino, and disposing of the body. Her Defense team argued at trial that the killing was done in self-defense, and that she was protected from prosecution by the Stand Your Ground law. The jury instead found her guilty, and today she was sentenced to life in prison, which means no parole or release of any kind in Florida. Appeals will certainly follow, but such appeals are difficult to win. She has an interesting issue that there is no direct evidence to rebut her claim of fear that might justify self-defense, as she was the only survivor. As such, the only evidence to rebut her claim is circumstantial, which makes it difficult for the state to overcome unrebutted testimony. The appellate decision could be an interesting read.

The topic is serious, with thousands of ill Floridians unable to seek medicinal marijuana to ease symptoms of Cancer, AIDS, and other ailments. However, Florida Weekly’s take is just too funny not to share. As we have noted before, Attorney John Morgan, of Morgan & Morgan has put his money behind his belief and is spearheading a petition drive to get medicinal marijuana on the Florida ballot. The current hurdle is a legal challenge to the wording of the proposed initiative by Florida Attorney General Pam Bondi. That is being decided in court right now. Until that is resolved, enjoy this image of a grinning John Morgan superimposed over a mess of marijuana. “For the Reefer” indeed… well played FL Weekly! 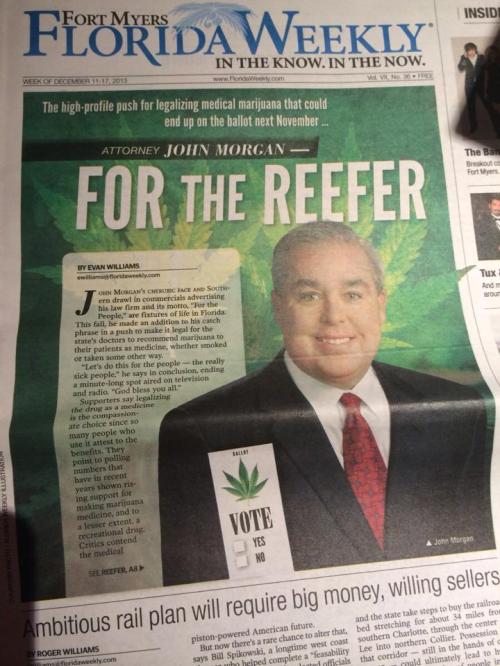 Crimcourts is on record against legalization for the simple reason that I’m a defense attorney… it would be bad for business!

Samantha Scheibe, who has accused George Zimmerman of pointing a shotgun at her, has sworn out an affidavit stating that she does not want for the State to go forward on the Aggravated Assault charge he is facing. Notably, she also contradicted her previous statement, saying that Zimmerman did not point the firearm at her. She says she was intimidated by investigators who interrogated her after the incident.

The state attorney’s office has the final decision on whether they proceed with charges, but the recantation of the primary allegation will make it hard to prove any case beyond a reasonable doubt. Only the two of them really know what happened that day, and without her cooperation, the state would have great difficulty proving the initial claim. I expect they will not proceed.

crimcourts : A Criminal Law Blog
Create a free website or blog at WordPress.com.