Couple Busted for Sex in a Home Depot Display Shed 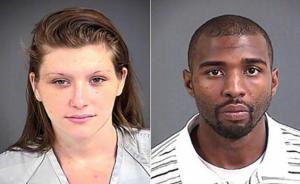 Check out the full article. Here’s the thing, the guy was charged with indecent exposure. Unless the laws there are different, it’s not indecent exposure if they closed the door behind them, which was apparently the case. The cops can’t claim to be offended by what they saw, if they are the ones who opened the door! Public indecency has a “public” element to the exposure. Disorderly conduct, on the other hand, may be the right charge. Be safe this holiday weekend!

FHP Trooper Robert Purser set up a company for his side business of scheduling off-duty troopers for details closing down roads. That was legit; but over-billing the construction companies was not. Authorities allege Purser over-billed by more than $200,000 over several years. Purser was dismissed by the agency Wednesday, after 23 years of service.

My first take upon seeing the headline, that billing issues sound more like a civil contract issue than a criminal issue. But delving further, the state may have enough information to show legitimate fraudulent activity. They served the warrant back in January of 2012, and allege that they found fake invoices at his home for work that was never done. That may be consistent with criminal fraud. The article doesn’t indicate whether the trooper was still working in the year-and-a-half-plus that he was being investigated. That could be a lot of cases out the window.

George Zimmerman’s Attorney has indicated that he and his client may seek reimbursement for between $200,000 and $300,000 in costs expended during his defense. It must be noted, because multiple media outlets have been reporting it unclearly, or incorrectly, that this money is not for legal fees. Zimmerman cannot be reimbursed for the money that would go to his attorneys. The money is limited to money for taxable costs expended by any defendant who is found innocent, potentially including a great deal for witness fees. That’s a substantial amount to tack on to the nearly one million that has already been laid out by the State to prosecute the case.

As I said, the legal fees are not included in this request. Mr. O’Mara indicated that neither he, Don West, or the rest of the Defense team have received any money for their work on this case. That’s the best legal value in history, for superb representation from experienced attorneys.

If Zimmerman is sued in civil court, for instance, if the Martin family files a wrongful death claim, he could potentially be reimbursed attorney’s fees for defending that suit, if he can demonstrate that he should have been immune from prosecution. He did not file an immunity motion in the criminal case, but that wouldn’t rule out exercising that rule if he were to be sued. It serves as a deterrent to the filing of such lawsuits.

We covered the young man, who goes by “Gator Fred“, when his arm was bitten off by an alligator last year. Well, he’s making the most of his 15 minutes, appearing on this week’s episode of “Gator Boys” on Animal Planet, of which we are big fans in the Crimcourts household. The show will be re-run several times. Crimcourts is still trying to figure out how to get on the show without losing a limb!

The Court of Appeal for the Second District of Florida ruled Friday that the arson and defrauding an insurer convictions for a Cape Coral man should be overturned. Jesus Perez was convicted in Lee County after a fire burned his house down. The case was circumstantial: while there was no doubt a fire occurred, there was no direct evidence that Perez started the fire. The Second District simply found that the evidence simply did not show that he started the fire, much less that he did so intentionally. While one of the samples taken by investigators showed the possibility of gasoline, the control sample also showed the same, which indicates that both were contaminated.

How did Mr. Perez end up being convicted, and sentenced to prison, on such thin evidence. The reality of the system is that while defendants are supposed to be innocent until proven guilty, the assumption often works against them. Perez had no way to prove how the fire started. Juries often want to give the state and its investigators the benefit of the doubt. As a society, we want to have faith in the those who are supposed to protect and serve. Unfortunately, that often means the presumption of innocence is more of a nice idea, than a reality. Fortunately for Mr. Perez, the appellate system granted relief in the end.

The State can ask for a rehearing, or appeal the case to the Florida Supreme Court, but barring a major change, the conviction will be reversed. Mr. Perez has already served nearly two years in prison, but is will get him out earlier, and he will not have to serve the 10 years of probation that had been ordered to follow his incarceration. That’s a big win for my friends at Brown, Suarez & Rios, who handled the appeal.

His motions for a new trial have been denied, and Paul Bergrin’s sentencing is set for Monday. He faces up to life in prison for his numerous convictions. Apparently, there will be a request to continue the sentencing on another date, so the case may not be resolved tomorrow. Note, the article states his appeals were denied, but such motions are distinct from appeals. He will still have the right to file direct appeal after the sentencing.

Just a reminder that FMPD will be conducting a DUI Checkpoint somewhere in Fort Myers this weekend. Don’t drink and drive, smokey is watching! Be safe.

Patriots May Still Have to Pay Aaron Hernandez

Aaron Hernandez was indicted on first degree murder charges by a grand jury, yesterday. Formerly a member of the New England Patriots, he was cut by the team shortly after his arrest several weeks ago. Ironically, the team may have to pay him more due to their haste in releasing him. They still owe him several million dollars as part of his signing bonus. Certainly the Pats will fight those payments, but they could end up writing checks to his inmate account.
The irony is that if the Patriots had left him on the roster, they would be more likely to recoup that money. Hernandez, who is likely to remain incarcerated, would be in breach and not able to receive those bonuses. The Patriots have already refused to pay an $82,000 workout bonus, and the union plans to file a grievance.
I am fortunate the I was able to cut him from my fantasy football keeper league team without any penalty!

The estimation released yesterday by the Orlando Sun Sentinel puts the number at over $900,000, but that doesn’t include costs incurred by Special Prosecutor Angela’s Corey’s office. An advance to her office as already tallied $80,000. Nor does that number include pretrial costs, which must have been substantial. I anticipate the final tally of your tax dollars will come in north of a million dollars. Nor does this include money Zimmerman had to outlay in his defense, much of that raised by donations.

Chelsea Manning, formerly known as Bradley Manning, has announced that she is transgender, and intends to begin the sex reassignment process to become a woman. USA Today did a thorough and thoughtful article on the issue, and quoted Neal Minahan, my friend from Boston University School of Law.

I’m proud of my classmates, in addition to Mr. Minahan’s work on this important and delicate issue, Jenn Rolnick Borchetta worked on the NYPD Stop and Frisk case, helping prove that NYC police have been systematically violating people’s rights for years. It’s great to see my colleagues on the right side of good things happening in the law, and great for the profile of BU Law! BU Law, as you may know, prides itself on being on of the first law schools to admit students regardless of race or gender.