O.J. Simpson was granted parole at his Nevada DOC hearing yesterday. He has to stay in custody until October, and will continue to be supervised when he’s released. Regular readers of this blog were not surprised at the result, as I’ve stated for months that he was likely to be granted parole, based on his past track record. The next big question is where he’s going to go, with some friends speculating he may move here to Southwest Florida. He was a Florida resident for years prior to being incarcerated, as Florida provides homestead protection so it’s difficult to take someone’s house away, for instance when they have a large civil judgment against them, as O.J. does for the civil suit finding him responsible for the deaths of Nicole Simpson and Ron Goldman.

Will the Juice get Loose? O.J. up for Parole Hearing Tomorrow… 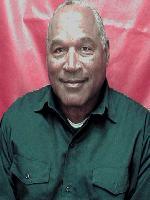 Tomorrow the State of Nevada will hold a parole hearing for O.J. Simpson, who’s been incarcerated there since he was convicted of an armed robbery in Las Vegas in 2008. He was previously granted parole on some other charges, but the more serious charges were not eligible until this year. Since he was successful at the last hearing, there is a good chance he will be granted parole this time, which should allow his release in October. He’s apparently even telling friends that he feels good about his chances.

Interstingly, even the victims support his release. One of them already passed away, but his family indicates that the would have supported his release, and the surviving victim indicates he has forgiven Simpson and feels he’s served enough time. In a crazy anecdote, a former prison guard recounts that OJ nearly got written up for an illicit cookie, which could have derailed his parole chances.

Could OJ Simpson get out of Prison this Summer

OJ Simpson is coming up for parole this year, and might actually be able to get out this fall. He’s in prison in Nevada for his role in a robbery since 2008, when he was sentenced to up to 33 years. He came up for parole on some of those charges in 2013, and was granted parole to those charges, but was not eligible for every count for which he is imprisoned. The other charges will be parole-eligible in October and they will likely hold the hearing on eligibility this summer. It’s completely within the discretion of the parole board, but in light of his being granted parole earlier on the other charges, and due to his advancing age, I expect he will be able to get parole later this year. I am far from an expert on it, since I don’t practice in Nevada, but Sports Illustrated does a great job looking into the process.

Did they find the O.J. Simpson Murder Weapon?

In a bizarre twist, LAPD announced today that they have a knife in place that was possibly recovered from O.J. Simpson’s estate. Apparently, a retired officer says that a construction worker gave it to him when we was off-duty, but working a detail across the street. It’s unclear, but it may have been when the home was being destroyed in 1998. The officer says that he kept the knife at home, and was getting it framed when he asked a colleague for some details of the case, at which point the colleague informed the higher ups, who ordered the retired cop to turn it over.

The L.A. police department indicate they are going to forensically test the knife, checking for blood, hairs, or anything that might determine if the knife was involved in the murders of Nicole Brown and Ronald Goldman. It’s doubtful there will be definitive evidence after so many years, and the knife apparently being buried for some time. Not that it matters, as double jeopardy prohibits O.J. from being tried again for the murders.

Months after the hearing on Simpson’s request for a new trial in his robbery convictions, the court issued a ruling denying his motion. He will appeal this ruling, but it is an even longer shot that an appellate court will overturn this type of decision. The article doesn’t give much detail on the ruling, merely that the judge found overwhelming evidence of his guilt. That’s not usually the standard for a motion for new trial, but that may just be that the report seized on that colorful language. I am not able to tell how sound the ruling is, but it is definitely a blow for O.J.’s attempt to get out of his robbery conviction.

O.J. Granted Parole, but He’s Not Getting Out

At least not for another four years. (Alternate headline: The Juice is NOT Loose.)

O.J. Simpson was granted parole today for some of the convictions related to a robbery in Nevada. He was ordered to serve several sentences consecutively, and the parole granted on these charges means that he begins serving the time on the consecutive sentences. He will have to be behind bars for another four years before realistically having a chance to be released from custody on parole. Today’s decision by the parole board was a first step, which was apparently appropriate as Simpson has been a model inmate, and due to his murder acquittal, is technically a first-time offender.

Florida readers may wonder why we don’t often hear about parole hearings. That’s due to a change in Florida law that essentially did away with parole. In Florida, convicts sentenced to prison must serve 85% of their sentence, with no opportunity for parole. They may get supervised release for the balance of their sentence, which is similar to parole. Every now and again a parole hearing will happen for a Florida inmate who has been incarcerated since before the change in the law, but otherwise, Florida’s sentencing is very harsh. Beyond that, many mandatory sentences are day-for-day, that is, there is no gain time. That includes 10-20-Life cases like that of Marissa Alexander.

OJ Simpson’s former attorney, Yale Galanter, was called  to the stand today. He has contradicted OJ’s testimony that he had ok’d the hotel room plan to recover the property. That means much of the motion will be a battle of credibility between OJ, the convicted felon, and his experienced and respected attorney. I would not be surprised if the judge does not rule immediately at the close of the hearing, but OJ’s chances at getting a new trial remain a long shot.

O.J. Simpson Testified Today in his Hearing on a Motion for New Trial

OJ took the stand to testify today in his bid for a new trial. It appears the main thrust of his claim as to why a new trial would be appropriate are shortcomings in his representation by his attorney. As Defendants are Constitutionally guaranteed the right to representation, the courts have held that if their attorney makes egregious errors, they were not properly represented at trial and can potentially get a new trial.

Not only do the errors have to be extreme, they must seriously indicate there would have been a different outcome. Also, the courts will usually not grant a new trial if the claim is based on strategic decisions, as opposed to outright mistakes. The burden is on the Defense to demonstrate the extent of the errors, and the likelihood of a different outcome.

Simpson testified that he had been given bad advice by his attorney before the incident- basically claiming that his attorney approved his actions in attempting to collect the property. If true, that could be a conflict of interest since the same attorney represented him at trial. Also, he claims that his attorney failed to inform him of the plea offer, which he would have been done serving his time by now had he accepted it. Also, he testified that his attorney kept him from testifying, thereby depriving him of his key defense. Again, the burden is on OJ to convince the judge of these claims. Such motions are generally long-shot, last-ditch attempts to overturn convictions. However, the allegations made by OJ are more dramatic that most. As far as I can tell from news reports, the hearing has not been concluded.

O.J.Simpson Back in Court Today

O.J. Simpson will be back in court today for a post-conviction motion on his Nevada robbery conviction. It’s a long shot motion, and really O.J.’s last ditch shot to get out of prison earlier than the minimum 9 years he must serve before he is eligible for parole. The co-defendant who was convicted with him at trial was previously released after his conviction was overturned on appeal, leaving O.J. as the only one of the robbers serving time for the robbery.
nbc oj story

I checked out the documentary on Glen Rogers, the so-called Cross-Country Killer that aired recently on the Investigation Discovery channel, and it is haunting.  The film doesn’t focus on the Nicole Brown Simpson and Ron Goldman murders for most of its 2 hours, though the OJ link is the big hook that it builds up to at the end.  The film spends a good deal of time going through the history of Glen Rogers, the making of a serial killer.  Extensive interviews with his sister and brother, who narrates the film, paint a desolate picture of an evil man.

The murders committed by Glen Rogers were brutal and horrific.  He claimed, and his brother believes, that he killed upwards of 70 people before he was caught.  While is only formally attributed 5 victims, there seems to be strong evidence of at least several others presented in the documentary.  The 70 would seem to be unrealistic.  It is certainly plausible that he killed more prior to beginning his documented spree (1993 until his capture in 1995), or others in the interim.  The last three were killed in a spree in about a week shortly preceding his capture.

I have to admit the Simpson/Goldman killings are possible.  They occurred in the midst of his serial killings, and apparently while he was living in the Los Angeles area.  His brother claims that he had discussed meeting Nicole Brown Simpson prior to her death, and had even made a comment about intending to “take her down”.  Therefore, he had opportunity and clearly the depraved mind making him capable of brutal murder.  His brother claims that Rogers sent his mother an angel pin, a souvenir taken during the killing.  Rogers has claimed that OJ was there, and put him up to the crime, but wasn’t the actual killer.

Skeptics have pointed out that the M.O. of the crime differs from Glen Rogers history.  However, like many of Roger’s murders, it was a violent knife attack with multiple stab wounds.  The motive was apparently robbery, which was a motive in other offenses (he was concurrently convicted of Robbery and Theft in the Cribbs case in Florida).  He certainly can’t be ruled out as a suspect in the case.

The implication of Glen Rogers’ involvement in the Brentwood murders does not absolve OJ: Rogers claim would involve OJ and still make him legally responsible for the murders.  Additionally, there is substantial and well documented evidence of OJ’s involvement in the killings (he was found civilly liable for the deaths in a later trial).  But the possibility that Rogers was involved does not rule out that OJ was guilty, as well.  There is a suspicion that such claims would be brought up now in a late ploy to try to delay Rogers’ trip to the executioner’s chair, which makes it less likely that the state would care to investigate the claims.  Which would be a shame.  Rogers may go to his death without a full accounting of his deeds.  There may be a lot more victims out there whose families will never know what happened.  I am still a skeptic, but I am fascinated at the far-reaching ramifications of a nearly 20-year-old killing spree.