We covered the story of Karey Woolsey, a Cape Coral man who released an album while sitting in Federal prison for drug charges. I’m a little behind on it, but the album hit Billboard’s Heatseekers charts last week. Woolsey is using the opportunity to speak out about the harsh sentences for marijuana laws, which drove his sentence on the case.

After weeks of presenting evidence in the multiple-murder/racketeering trial for the alleged longtime fugitive mob boss, the government has rested its case. I wish I’d had more time to follow the case more closely and share with the Crimcourts readers, but it’s not too late to look back. From the witness who turned up dead, to verbal outbursts in court from his former confederates, the trial has been colorful. The Defense prepares to present their case, and if the opening statements are indicative, they may not try to fight the charges that vehemently, rather to disprove allegations that Bulger was cooperating with authorities. He firmly denies being a snitch.

So He Really Married an Axe Murderer

Well, not an axe-murderer, but possibly a serial killer…

Al Gentry spent 25 years trying to find out who killed his brother. His investigation turned up that his brother’s wife left behind a trail of five dead husbands. She was ultimately charged with solicitation of his murder, but died before she could be tried. Investigators were never able to build a case against a shooter, nor were charges filed in the other deaths, though several of them are suspicious. It’s a crazy story and a good read: http://www.foxnews.com/us/2013/07/17/nc-man-whose-long-search-for-brother-killer-led-to-elderly-georgia-widow-has/?intcmp=obnetwork

UF linebacker Antonio Morrison was arrested this weekend for barking at a police dog, and resisting/obstructing an officer. Florida has a statute dealing with police dogs which has several levels of offenses for what is done to the dog. Morrison is charged with the lowest level, which prohibits interfering, harassing, or teasing a police dog in the course of its duties. It can be a felony to kill or seriously injure a K-9. It doesn’t specifically say barking at the dog, but everybody knows that agitating a dog will cause that dog to react.

Morrison’s defense would be that the agitation did not occur in the course of the performance of the dog’s duties. The dog was apparently restrained in his handler’s squad car when the barking began. He did not prevent the dog from doing any of its duties if it was locked up in the squad car at the time of the incident. That’s a tough sell for the prosecutor. Morrison could also argue that he wasn’t intentionally or maliciously harassing the dog. He’s claiming that the dog barked at him, and he was only responding with a “woof woof” sound because the dog barked at him. He also has to deal with the obstruction charge.

This case would make a fun trial to watch, but it’s unlikely to go that far. Morrison probably has bigger concerns than this case, as he’s also facing a battery charge.

Florida Football Player Arrested for Barking at a Police Dog

UF Linebacker Antonio Morrison was arrested this weekend for barking at a police dog, and obstruction of justice, both misdemeanors. This is going to be bigger trouble due to a recent battery arrest, for which he received deferred prosecution. This new charge likely violates his diversion contract, and he will have to face charges for the original battery now. He has been suspended the first couple games of the season.

Coming Monday on this blog: Can they really arrest you for barking at a police dog? (yup) 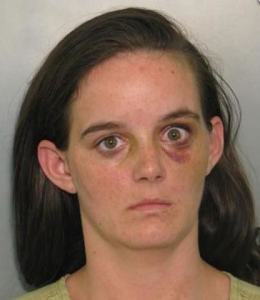 Amanda Linscott, the young woman in Charlotte County who gained media notoriety for allegedly pulling a gun during sex in a moving vehicle, resolved her case this week. The state had initially picked up armed robbery charges. She contested, claiming that she was the victim of a beating, and had injuries to support her claim. She potentially could have asserted a stand your ground defense. The issues in the case were enough to convince the parties to negotiate, and she plead no contest to the greatly reduced charge of Aggravated Assault. She was sentenced to 3 years of probation, with assorted fines, fees etc., and the court withheld adjudication. That means she will not be a convicted felon for this offense if she successfully completes her probation. The state made an offer attractive enough to convince her to plea instead of the risk of a 10-20-Life prison sentence if she was unsuccessful at trial.

Another Movie is in Production Based on the Amanda Knox Case

British filmmaker Michael Winterbottom is making a movie version of “Angel Face: Sex, Murder and the Inside Story of Amanda Knox” by Barbie Nadeau. Winterbottom says the movie will be more about society’s interest in violence instead of love, so we’ll see how it eventually turns out.

The National Review has taken a shot at Angela Corey. This opinion piece ran today online, detailing more of her past transgressions. The gall to call Harvard to try to get Alan Dershowitz fired is pretty spectacular. The fact that … Continue reading →

The government is amassing massive amounts of data on public movements, according to a report released by the ACLU. This is the logical expectation of the growing use of these license plate scanners by law enforcement, as we have previously covered here on Crimcourts. Big brother is watching, recording, and compiling.

She’s being criticized all over for losing the prosecution of George Zimmerman for killing Trayvon Martin, and problems continue to mount for prosecutor Angela Corey. We covered the news that she fired the whistleblower employee , Ben Kruibdos, who revealed that she was unlawfully suppressing evidence on this blog a few days ago when the news broke. As I predicted, a whistleblower lawsuit against Ms. Corey’s office has been announced by Mr. Kruibdos’ attorney. In a bit of delicious irony, the attorney Mr. Kruibdos has retained is himself a former employee of Ms. Corey, who resigned last year due to disagreements with the way she ran the office.

Mr. White was subpoenaed to testify at the hearing for sanctions, and it got pretty contentious when he was examined by prosecutor Bernie de la Rionda, his former boss at the SAO. So, basically Angela Corey’s State Attorney’s Office is kind of a shitshow. Defense attorney Don West was called to the stand during that hearing, alleging under oath that they had caught de la Rionda “hiding the information.” The judge reserved ruling on the discovery violations at that time, saying they would be better handled after the trial.

Now that the trial is concluded, the Defense team is pushing for the issue to be revisited. Mark O’Mara went so far as to tell Reuters, “This is not acceptable, and is not going to be tolerated in any case that I’m involved in.” He continued,  “They are a disgrace to my profession.” That’s the kind of harsh rhetoric that is more likely to come from his co-counsel on the case. Mr. O’Mara’s demeanor has consistently been more low-key, but the alleged violations have really riled him up. And rightly so, if the allegations are true, that the State Attorney’s office deliberately suppressed Brady information, that is a serious breach of the public trust and the right of the Defendant to a fair trial. It will be interesting to continue watching the fireworks.