It looks like a civilian SUV, albeit with a large push bumper attached in front. The new undercover vehicle appears to be a Chevy Blazer, you can see the pic on News-Press.com.  It was purchased with $150,000 grant money, and not only has full police vehicle capabilities,it also has a mobile breathalyzer inside. The grant has also provided additional money for the Department to step up DUI enforcement, including DUI Checkpoints, so be prepared. The government is spending money to be more in your business this coming year.

UPDATE: Photo Released. The SUV is in the background… 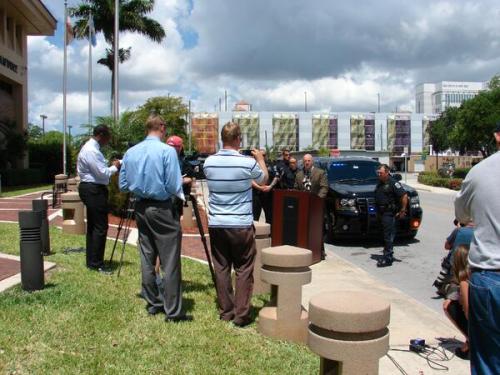 The FMPD Undercover SUV unveiling. Not so secret…

Collier Convict, Accidentally Released Early, Seeks to be Let Out of Prison Sentence 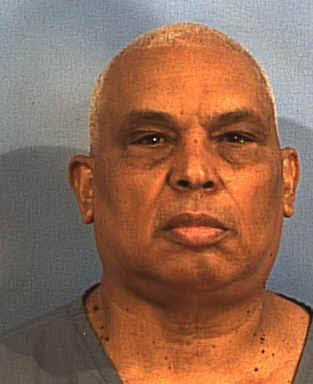 Marcelino Gonzalez was convicted in Collier County of Cocaine Trafficking. But instead of serving a 15 year sentence, he was accidentally released from the Hillsborough County Jail. He moved up north, and resumed living and working as a free man. Florida officials realized their error and caught up to him a few years ago, and proceeded to put him back in prison. He has now filed a motion to be released, as his sentence should have been up years ago.

The general rule in Florida is that if a convict is released early, through no fault of their own, they should be entitled to the time they would have been serving. Basically, for such a ‘Bank Error in Your Favor’, the sentence clock is still running, and you benefit from their error. He was sentenced to 15 years, starting in 1996… not 2009. It’s too bad he doesn’t have a lawyer to file the correct motion for him. He missed the sentence he should have served, and now he’s serving time he should not. Two wrongs do not make a right, and the letter of the law is that he should be given credit, and released.

OJ Simpson’s former attorney, Yale Galanter, was called  to the stand today. He has contradicted OJ’s testimony that he had ok’d the hotel room plan to recover the property. That means much of the motion will be a battle of credibility between OJ, the convicted felon, and his experienced and respected attorney. I would not be surprised if the judge does not rule immediately at the close of the hearing, but OJ’s chances at getting a new trial remain a long shot.

Piotr (Peter) Urbanski was arrested last night for growing about 30 marijuana plants in his home. His girlfriend has been arrested as well. NBC-2 got a statement from Sheriff Mike Scott, who indicates that the defendants claim the marijuana was for medical purposes, which is not legal justification in Florida. Also, that’s a lot of weed for a couple of people’s medical needs. He has been charged with felony possession, felony production and misdemeanor paraphernalia.

No booking photo is available, as he is law enforcement…

Brooksville resident Timothy Carr was arrested a few weeks ago after complainants indicated he was recklessly operating a motorized shopping cart in his local Wal-Mart. If you’re gonna go for it, go all out… and Carr went for it. He grabbed an alcoholic beverage off the shelf, popped it open, and proceeded to careen around the store, knocking items off of shelves. When he was confronted, he admitted that he didn’t have money to pay for the beer, and was additionally charged with petit theft, in addition to disorderly intoxication. 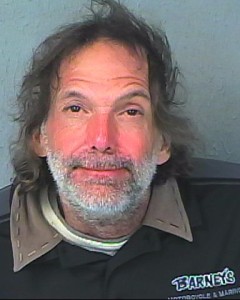 I was wondering if the State would try to charge him with a DUI, but it would be a stretch to do so. First of all, the halls of Wal-Mart are not generally open to vehicular traffic, though they could conceivably try the case on an actual physical control theory. Also, a vehicle includes any device a person could be transported along a highway, so the personal assistance device exception to motor vehicles would not apply. Somebody could definitely be charged with DUI for a motorized cart (or wheelchair), but the state recognized the difficulty of proving that in the aisles of Wal-Mart.

Mr. Carr’s theft charge is more serious. Due to his prior theft convictions, the state has enhanced the charge to a Felony. He could potentially go to prison for opening a beer in Wal-Mart. He has several recent disorderly intoxication charges, so there certainly appears to be a substance abuse issue at the root of his issues. Let’s hope Mr. Carr is able to get help and move his life in a new direction. He could go to trial as soon as a few weeks from now.

Chad Johnson, on probation for a domestic incident last year, has a warrant out 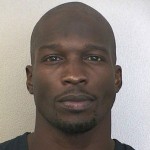 for allegedly failing to contact his probation officer. He will need to turn himself in to jail, but could get out of jail pretty quickly with some decent legal representation. That’s not going to be helpful for his Memorial Day weekend plans…

Another LCSO Deputy Fired, for Lying

Former Lee County Sheriff’s Deputy, Sgt. James Magas, was fired last week for insubordination, essentially lying. He left his assigned duty area, and then lied when he was questioned about his location. The good news is that Sheriff Mike Scott continues to hold his employees accountable if they are derelict in their duties. He has consistently punished untruthfulness at LCSO. The sad thing is, that it is another example of how some cops will lie, even over rather silly little things.

O.J. Simpson Testified Today in his Hearing on a Motion for New Trial 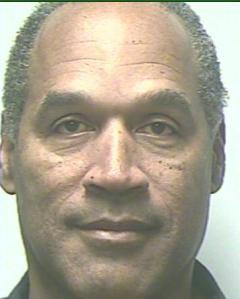 OJ took the stand to testify today in his bid for a new trial. It appears the main thrust of his claim as to why a new trial would be appropriate are shortcomings in his representation by his attorney. As Defendants are Constitutionally guaranteed the right to representation, the courts have held that if their attorney makes egregious errors, they were not properly represented at trial and can potentially get a new trial.

Not only do the errors have to be extreme, they must seriously indicate there would have been a different outcome. Also, the courts will usually not grant a new trial if the claim is based on strategic decisions, as opposed to outright mistakes. The burden is on the Defense to demonstrate the extent of the errors, and the likelihood of a different outcome.

Simpson testified that he had been given bad advice by his attorney before the incident- basically claiming that his attorney approved his actions in attempting to collect the property. If true, that could be a conflict of interest since the same attorney represented him at trial. Also, he claims that his attorney failed to inform him of the plea offer, which he would have been done serving his time by now had he accepted it. Also, he testified that his attorney kept him from testifying, thereby depriving him of his key defense. Again, the burden is on OJ to convince the judge of these claims. Such motions are generally long-shot, last-ditch attempts to overturn convictions. However, the allegations made by OJ are more dramatic that most. As far as I can tell from news reports, the hearing has not been concluded.

People often claim that traffic citations are more about fund-raising for cities and counties than they are about the safety of drivers. While the communities continually deny this, they rake in money from the citations, especially red light cameras. Well, it’s hard to claim that the communities are concerned about safety when it turns out that some communities are deliberately SHORTENING yellow lights, which directly leads to more red light tickets. Studies have shown that shorter yellow lights lead to more accidents, but politicians are still using the camera company’s talking points to claim justification for shortening the yellows. Some of those same politicians are receiving campaign donations from the camera companies!

More insidious is that camera supporters put through a change in the law to allow the yellow lights to be shortened. Still, communities in the WTSP story are still shortening the yellow lights below the new minimum standards. Watch reporter Pransky confront the spokesman with evidence of the intentional shortening. This is sickening.

The red light cameras are clearly a racket for communities to tax drivers for the most minor of infractions. Amidst some tumult about the cameras, Collier took theirs down a few months ago. One of the commissioners there admitted it was a revenue generating program, and they weren’t making as much money when the law changed to prevent the camera company from making a commission based on the number of tickets issued. This is shameful by these other Florida communities who are putting drivers at greater risk, just to ticket them for more revenue. It’s government working against the people who it should be working for, and I applaud the investigative efforts of Noah Pransky and the WTSP, Channel 10 news team in Tampa for bringing this racket to light. Great job, I can safely say we Mr. Pransky’s reporting in Southwest Florida.

Thanks to Drudge Report for pointing out the story.

Noticed a lot of FHP cruisers patroling I-75 and elsewhere today in Southwest Florida. Anybody heard about any stepped up enforcement details? Perhaps they are just breaking in the recently graduated academy class… END_OF_DOCUMENT_TOKEN_TO_BE_REPLACED