What We Know about the Zombicon Shooting Case So Far…

Prosecutors filed a motion this week for Pretrial Detention: that’s a request to keep the man they say was the Zombicon shooter behind bars until his trial date. I spoke to NBC-2 yesterday, that motion summarizes many of the facts the State says make up their case against Jose Bonilla: 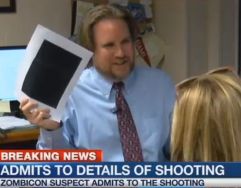 Part of the Redacted Motion

The motion has been redacted for release, so we can’t see what the state says are the specific statements that he gave to investigators, or that may be on the recording with the informant. However, at the end of the motion, the prosecutors summarize their argument, and indicate that he admitted that “he is responsible for the shootings at the Zombicon event” and that he repeated some admissions afterward to investigators. I’m going to add a Stand Your Ground tag to this, as it also appears he may have claimed his actions were justified due to someone else pulling a gun, but we don’t know specifics yet.

More details will come out when the discovery becomes public record, but not for a few weeks. Monday, the court will hold a hearing on the Pretrial Detention motion, where he will likely continue to be held with no bond. You can watch the NBC-2 video here.

Documents released today reveal why it took more than two years to bring charges against Jose Bonilla, even though he was identified as a suspect just a few weeks after the Zombicon shooting in October 2015. There were several calls to Crimestoppers, with anonymous tipsters indicating that Bonilla was the shooter and bragging about it. However, law enforcement did not want to move at that time, because they didn’t have sufficient evidence to bring the case to trial. The anonymous tips are hearsay, and they need someone to testify in order for that evidence to be admissible in court.

The stayed on the case, tracking Bonilla down, conducting several interviews, and talking to many of his friends and family. Ultimately, the break in the case came at the end of 2017, while Bonilla was in jail, Detectives indicate an informant in the jail came forward with information about Bonilla’s comments. The prosecutors took their time, and instead of rushing to make an arrest, they had the informant wear a wire to record his conversations with Bonilla. The details have been redacted from the public records, but the Detectives indicate that he admitted to involvement. More details may follow at the detention motion on Monday. Bonilla is innocent until proven guilty, but he is unlikely to get a bond at the pretrial detention hearing tomorrow.

I spoke to NBC-2 again about the case, and may be on the evening news tonight.

Will the Alleged Zombicon Killer get a Bond?

At first appearance yesterday, Jose Bonilla’s attorney David Brener asked the judge to continue the case to today’s first appearance so he could have an opportunity to review the 17-page Motion for Pretrial Detention that the state filed. The motion is essentially a request to hold the Defendant without a bond, and will need to be scheduled for a hearing before the soon-to-be-assigned trial judge within five days.  That motion hasn’t been released yet, so we do not yet know the facts from the investigation that makes the State believe that Mr. Bonilla was the Zombicon shooter: which Mr. Brener will likely argue either at today’s first appearance, or at the pretrial detention motion hearing in a few days.

I gave some comments to the news the other day: though at this point, we don’t know much until the underlying facts are released. FMPD has said that Bonilla was identified early in their investigation, but we don’t know what changed that caused them to move now, but they are still actively requesting any additional information.

UPDATE: No Bond for now, to be reconsidered at hearing next week.

Arrest Made in Zombicon Case in Fort Myers

Fort Myers police have arrested a man they say is the shooter in the Zombicon shooting case from downtown Fort Myers in 2015. Police have arrested Jose Bonilla from Immokalee and charged him with Second Degree Murder of  Expavious ‘Tyrell’ Taylor. He is charged with 5 additional aggravated battery counts and a count of evidence tampering for the other people injured in the shooting. FMPD has not said much beyond the arrest, but more details will be coming out in the days to follow.

You can see from the photo, multiple agencies are involved- FMPD, State Attorney, LSCO, FBI and Collier Cty SO. He was identified as a subject early, but it is unknown yet why action was taken now. FMPD is still asking more people to come forward if they have details.

UPDATE: Here’s a link to the video of the press conference (albeit very limited statements)

Police Looking for More Info from Tipster RE: Zombicon Shooting

FMPD held a press conference today, and asked a tipster who previously came forward with valuable information to get in contact with them again. They are hoping to get more vital information from a tipster that contacted them around November 11-13. They have followed up on hundreds of different tips, and believe that one of the tipsters may have the information needed to make an arrest.

They are asking anyone who made a tip during that time to contact them tomorrow or next Wednesday, between 9 am and 3 pm at 1-800-780-TIPS (8477). They reward for information leading to arrest is no at $36,000. Police stressed that the young man who was shot, Expavious ‘Tyrell’ Taylor was a totally innocent victim.