29-year-old Timothy Bontrager is the next in a new wave of crime, the sleeping burglar. He broke in a house, and the homeowner got up in the morning, and found him sleeping on the couch. It’s not a burglary to sleep on someone’s couch. Unfortunately Bontrager also took the victim’s wallet and some other items, so he’s facing felony charges.  This is the second publicized case of Sleep-Burgling in the last few months, both in Florida, natch.

I should clarify, it is still against the law to break into someone’s home, even if you are only going to sleep. The offense of Burglary includes the intent to commit another offense while in the home/structure/vehicle. This guys intent was pretty clear, since he walked off with the homeowner’s property! 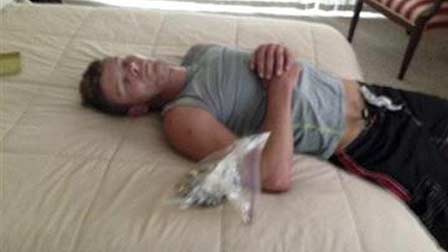 Dion Davis must have worn himself out breaking into a Nokomis, Florida, home. The cleaning lady found him sleeping, next to a bag of jewelry he had looted from the home, and called police. He was still out cold when deputies arrived, and they were able to take a picture of him asleep on the victim’s bed, booty lying next to him.

Sounds like he was high, probably on an opiate or other depressant. That’s not going to be a legal defense to the Burglary of a Dwelling and Theft charges he’ll be facing.

I recently questioned a local deputy who testified that there were no cameras available for him to take pictures when he was called out to investigate. It’s a shame, he could end up missing out on the best evidence photo, ever.