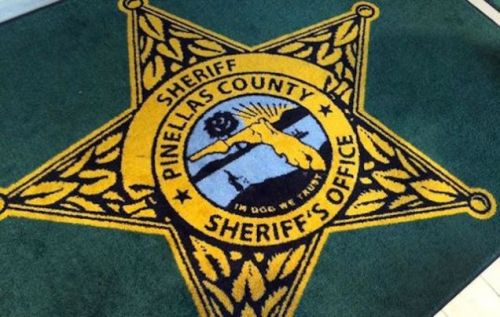 The misprint on the rug reads “In Dog We Trust”. We do trust in dog.

Sheriff Mike Scott May Have Issued His Own Angry, Ranting Press Release

John Rupolo, who has been let go by Fox 4

Former Fox 4 reporter John Rupolo was arrested early this morning in Lee County for a violation of an injunction. This wouldn’t normally be the kind of news I’d cover on Crimcourts, except my sources have indicated that Sheriff Mike Scott took it upon himself to send a ranting email to several media contacts in Southwest Florida. Scott has had a chilly relationship with the media, in particular the News-Press, and he singles out one of their former reporters in his “Press Release.” It really comes across as a person beef, as opposed to informational. It’s sarcastic in tone, and such press-releases would generally be handled by LCSO’s public information office. There is concern that this reflects poorly on Scott’s professionalism. On the other hand, it’s good that he is communicating with the media. The purported email from Scott was forwarded to Crimcourts, and I will post it below. Fox 4 indicates that Rupolo has been let go.

The following email is reportedly from Sheriff Mike Scott:

I would imagine you know by now that John Rupolo is in our corner (the corner of MLK and Monroe) following his early morning arrest for violating a Domestic Violence Injunction for Protection.  He has a $15,000 dollar bond and may miss your 6 o’clock broadcast.  You and your media counterparts copied here are always very quick to publicize arrests of high-profile folks like athletes, teachers, coaches, firemen, cops, and even former Commissioner Bigelow’s young friend.  Heck, I recall a recent instance where the News-Press reported on the arrest of a “former Deputy” who had not been employed as such for more than ten (10) years.

Attached for reference is the criminal history of former News-Press buffoon Larry Alan Cook aka Sam Cook and I recall a notable absence of media coverage when I exposed Larry to you last year and just before he retired.  Granted, his crimes (including leaving a human being on the roadside after striking him with his vehicle in a drunken stupor) were some time ago; however, it may have been of interest to our community that he hid behind an alias for all those years and begged the question and high likelihood that the News-Press knew that their critical watchdog was a former felon himself…the ultimate hypocrisy.

Anyway, I will be interested to see how or if the arrest of this high-profile, local critic John Rupolo is covered by you and your counterparts copied here.  Maybe you can even solicit public opinion?  You know, accost people in a Publix parking lot and ask them what they think until you find a couple that fit well for your spin or perhaps invite online comments to gin up some controversy.  Either way, I am sure you will give this high-profile arrest its due because you media types always call it as you see it; fair and balanced.  I notice it’s not on your website yet.

The sticky web of justice

It cracks me up when law enforcement attaches cute-sy names to their sting operations, recently the Sheriff’s Office has conducted a Felon-sweep and Operation Spiderweb.  My ongoing favorite are the DUI-targeted enforcement patrols they call Wolfpacks.  The drivers are being hunted, you see…

The latest is the Lee County Sheriff’s Operation Spiderweb, wherein the deputies spun a net to entangle 40 “sick, creepy animals” as Sheriff Mike Scott referred to them.  And to be sure, some of them are:  investigators posed as children as young as 11, and lured several dozen predators, including a schoolteacher, to make sexual plans with the undercover officers they believed to be young.  However, not all of these arrestees are the “real monsters and real scary, creepy people” that Sheriff Scott suggests they are.  Some of them are only teenagers, a few years older than the non-existent victims.  Over half of them are under the age of 30.  There were never any children in harm’s way.

The recent discussion of the Sarah Jones case has prompted me to discuss the problems with treating all sexual criminals as horrible sexual predators.  If a 16-year-old has sex with a 23-year-old, it’s fine.  But if an 18-year-old talks about fooling around with a 15-year-old… they are branded as monsters and face charges that could send them to prison for decades.  Many of the defendants charged in Operation Spider Web weren’t just charged with one count.  Instead, they got multiple counts of enticing, using a 2-way communication device, and travelling to meet the non-existent minor, or more.

Additionally, the political motivation is clear as the Sheriff holds a big press conference, just more than a week before the upcoming election.  Any time you get enticement charges, there are concerns about entrapment:, would these people have taken a criminal turn if law enforcement agents weren’t guiding them that way.  The concerns about law enforcement’s motives are increased when the sting is an election tool.  The more “predators” they catch in their net… the bigger the headline going into the final weeks of campaigning.  It will be fascinating to see how these cases pan out. #operationspiderweb

FMPD plans a “sobriety checkpoint,” a DUI checkpoint, this weekend.  Location not announced- but somewhere in the city- usually near downtown.  Be safe out there, don’t drink and drive and ruin your Labor Day Weekend with a night in jail!

LCSO did a checkpoint a few weeks ago.  They stopped over 1,000 cars, and got 6 DUIs.  It’s easy to point out the irony (or the lack of need) of running a DUI checkpoint when the rate of impaired drivers is >1%.  Instead I’ll point out that if a dozen or more officers had been patrolling instead of harassing 900+ innocent drivers, they likely would’ve caught more DUI offenders! It’s good for business for us criminal defense attorneys…