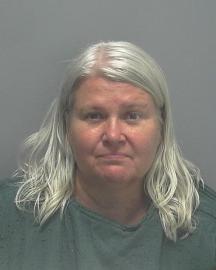 Extradition complete, alleged killer-granny Lois Riess has arrived in Lee County, and at first appearance today, the judge determined she will be held without bail. Riess is currently facing second degree murder charges in the death of Pamela Hutchinson, who’s body was found a couple weeks ago on Fort Myers Beach. Riess allegedly killed her, stole her identity, her vehicle and cash, and used them to flee to Texas, where she was caught last week. Riess is also suspected in the death of her husband in Minnesota, though charges are still pending there.  LCSO even had her delivered to the main office so they could give her a perp walk: a rare ‘honor’ not seen since they picked up Mark Sievers.

While the current charges are for second degree murder, the State could take the case to a grand jury to indict for first degree murder, as the murder appears to be premeditated. If the charges are upped to first degree, the state could decide to seek the death penalty, in light of the aggravating factors that Mrs. Riess may have committed the offense for pecuniary gain and to aid her flight from the earlier murder she may have committed. There may be mitigating factors, such as mental health issues: Texas has indicated that she suffers dementia. Insanity could be a defense, if the mental health disorders were so severe she could not tell right from wrong, though the fact that she may have plotted a murder to abscond on a previous murder would vitiate her insanity claim. The case will be interesting from a legal standpoint.

There was never any doubt that he did it, he was apprehended shortly after the crime splattered with the victims’ blood. However, Michael Spiegel’s defense at trial was that he was not sane at the time of the killings. The jury found him guilty in just a couple of hours.

Insanity is an affirmative defense, which means the burden is on the Defendant to prove that he was insane at the time. It’s difficult to do, especially when two people are brutally killed. There was evidence of a long history of mental illness, but the jury did not find it sufficient. The State argued that the steps he took demonstrated planning: which is indicative that he understood the nature and wrongness that he undertook. The finding today doesn’t mean that he wasn’t crazy, but that the jury wasn’t convinced that he was so mentally impaired that he did not appreciate what he was doing or that it was wrong.

There is a 25 year minimum mandatory sentence on the firearm charge. Due to his age, Mr. Spiegel will almost certainly die in prison, even if the judge doesn’t give him a life sentence.

You can read the standard Florida jury instruction on Insanity here.

Trial is underway on the Michael Spiegel case. Spiegel is charged with killing his ex-wife and her new fiance a couple days before their wedding. Since he’s 72 years old, Spiegel is probably going to be sentenced to the rest of his life in prison if he is convicted of any charges related to the killing. As Mr. Carpenter points out in the NDN article, it is extremely hard to convince a jury that someone should escape culpability with an insanity defense: they must have such a great mental impairment that they do not know what they are doing or cannot tell right from wrong. The James Holmes defense attempted this argument, unsuccessfully. The state is arguing that his pre-planning, google searches, and so forth demonstrate comprehension and understanding of the wrongfulness of his crime.

The tragedy in Newtown, and other recent shootings such as at the Batman theater, the shooting involving Congresswoman Giffords, and the mass shooting in Norway have all involved individuals with severe mental illnesses.  All deeply disturbed individuals, whose corrupted minds lead them down a horrible path of destruction.  There must be a way to address this.

This incident also brought to mind the killing by Mario Lopez in Cape Coral.  The killing happened in 2002, before I moved to Florida, but the trial and retrials occurred during my practice here.  Lopez was accused of stabbing his close friend 145 times.  He snapped.  He was found not guilty by reason of insanity, and committed to a mental institution until he’s cured, which will probably never happen.  There are echoes of that case again with the patricide that recently ocurred in Cape Coral: the young man recently ran away from the mental health crisis center.  There must be a way to keep this from going so far.

It appears that often the only way to get help is to wait until somebody enters the criminal system, and only then after the most serious of charges.  Frequently, the criminal system ends in a cycle of incarceration followed by brief freedom without treatment, only to offend again.  Local crazy person Victor Casiano was only out of custody after his last jail stint for a few days before he was confronted by an officer, started an altercation, was rearrested, and got sentenced to 3 more years.  The man walks around yelling at inanimate objects.  Everybody in town knows he’s crazy, yet the cycle continues to turn.  There must be a better solution than the revolving-door criminal justice system.

Getting help can be the hardest thing.  Unless your family is rich, your options are limited.  I personally had a client who could not control her son.  The facts were eerily similar to the “I Am Adam Lanza’s Mother” essay that has circulated the internet lately.  She could not afford to commit him to a private facility.  The child was so disturbed that it was not safe for him to live in the family home, and the family made the difficult decision to give him up.  Only in the custody of the state would he be safely housed and given counseling… at least until he turns 18.   There must be help available for parents.

There must be a better way.  We must prioritize mental health, both long-term and preventative treatment, as a matter of national security.  Far more Americans are killed by sick people, other Americans who suffer from mental illness, than are killed by terrorists.  Yet, our mental hospitals remain shuttered, and outpatient options remain inadequate to deal with the breadth of mental illness in Florida and across the country.  The system is failing, and we as a society are failing in our inability to help those sick individuals who desperately need the help.  It is a matter of protection and safety not just for those who are affected by mental illness, but for everyone in society who might be touched by their actions.  There must a serious movement to establish a system to work with the mentally ill.  There must be action to prevent the next Newtown.

What is incompetence to proceed?

Robert Dunn’s attorney has filed a motion to determine if his client is competent to proceed with the remainder of his 1st Degree Murder trial.  There’s always a lot of confusion about what incompetence means, so I wanted to do an informative post about it.

First, keep in mind that incompetence is not the same as insanity.  Competence has to do with whether or not a defendant is presently able to stand trial.  Insanity generally deals with their mental state at an earlier time: at the time the crime occurred.  The insanity defense argues that the defendant was so crazy at the time of the offense that they could tell right from wrong, basically.  It is actually pretty rare, in spite of hearing about it all the time in movies, because the level of insanity has to be very high, and it is an affirmative defense: that is, the Defense has to prove the defendant was insane.

When someone is incompetent to stand trial, they are not currently able to be tried due to their mental state.  This usually is related to their sanity, but can also be due other mental incapacities, such as learning disability, Alzheimer’s disease, or brain injury.  The Florida Eleventh Circuit has a handy breakdown on their website.  Defendants should be found incompetent if they do not:

When an issue regarding competency arises, such as a defendant starts acting irrationally, or fails to continue communicating with their attorney, it is the attorney’s duty to address the issue with the court.  They do so by filing a motion, specifically stating their reasons for their concern.  Then it becomes the duty of the judge to order that the Defendant be evaluated, by up to 3 experts, who will then report back to the court to determine if the Defendant can stand trial, or continue with trial if it is already underway, as in the case of Robert Dunn.

If they are found incompetent, the judge will commit them to a facility for treatment if the Defendant is not suitable to be treated in the community.  The treatment will actually attempt to restore their competency if possible, at which point they will be brought back to court to conduct a trial.  They must be subject to continuing review to determine if they must remain committed, or to see if the case can return to court to be resolved (by trial or other resolution).

The court is hoping to have the expert reports by Monday to determine if the trial will be able to proceed.  If he is found competent, he could finish the trial, or enter a plea, as he has indicated is his desire.  If he is found to be incompetent, he would almost certainly be committed.  Additionally, the judge may not be convinced if the experts are not in agreement, and it’s possible a third evaluation could be ordered.  #robertdunn