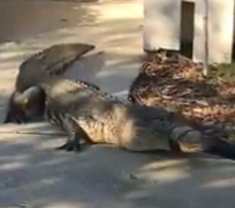 A Sarasota resident was surprised when an Alligator wandered into his yard. He didn’t need to be scared, because the gator’s mouth was already taped up. It appears the gator had recently been trapped, but that the gator had then been stolen. I guess the thief ended up with a little more than he bargained for!

It’s been the lead story locally, and it got picked up on Drudge today: a young man in Moore Haven had his arm bitten off by an alligator.  He feels lucky because, and I’m not making this up, it took his right arm, because he can still take out his airboat, which only requires his left arm.

Why am I including this in my criminal law blog.  Well, it’s against the law to feed or molest alligators in Florida.  A criminal investigation was commenced against the Everglades City tour captain who recently lost his hand to an alligator in front of 6 shocked tourists.  As far as I can tell, no charges have been filed as of this writing.  The reason being, that feeding alligators or interacting with them decreases their fear of humans, which makes them more dangerous.  In both this case, where the boy may have instigated the gator, and in the Everglades City case, where Wallace Weatherholt may have fed or taunted the gator, the gators in question were destroyed to try to recover the body parts they had taken.

Even if the gators don’t take pieces of people, they can end up being destroyed out of concern they could become dangerous.  There was an episode of Operation Wild where people were feeding a gator.  The FWC officer commented that by doing so, they had killed the gator- which was going to have to be removed due to its lack of fear of the proximity to people.  It’s a crime, and can even be a felony, in spite of making for a really cool airboat tour.

Here’s more on the Gator attack.