Making the Case for Body-Worn Cameras

I have repeatedly recommended the adoption of body-worn cameras for law enforcement. It’s a win-win situation. There’s never a problem of having too much evidence. Having active cameras can only help get to the truth for police-citizen encounters. The body cameras cut both ways, and do not favor a party who’s statement does not line up with the video… the video favors facts.

Body worn cameras would be beneficial in the recent Los Angeles shooting of Dijon Kizzee. L.A. deputies claim that he dropped a firearm and was picking it up when they shot him. However, they did not have body cameras. The only video was earlier by someone with a camera phone and that footage only shows Kizzee running away. We don’t know what happened that led up to the moment of the shooting, and if deputies had bodycams, that might have given us an answer. It certainly would be beneficial to the Sheriff’s Department if they had body cameras that showed Mr. Kizzee reaching for the weapon. Departments have resisted using body cameras when so often, when the officers are acting appropriately, the cameras would be for their protection. Admittedly, there are flaws: the cameras don’t catch everything, but that’s not a reason not to try to get video. 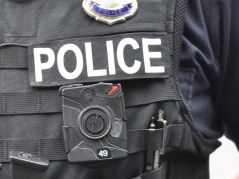 Sarasota is considering body cameras for their police force. One of the concerns is the expense. The Herald-Tribune ran this editorial last week, arguing that the cost is worth it to acquire body cams. The editorial also ran here in Fort Myers the other day- Fort Myers and Cape Coral do issue body cameras, though the Lee County Sheriff’s Office has not. The Charlotte County Sheriff has recently reconsidered his stance, and will now be seeking body cameras for his department. I applaud this decision and encourage other law enforcement agencies to join CCSO, FMPD, CCPD and many others in outfitting their officers with this important equipment.

Again, be sure to check out the editorial: https://www.heraldtribune.com/story/opinion/editorials/2020/09/15/police-use-force-can-lessened-body-cameras-if-done-right/5790554002/