The FMPD Officer Investigation Continues to Evolve with new Details 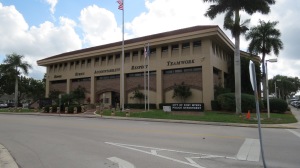 WINK has done some follow-up reporting about the continuing situation with FMPD officers that were suspended after the Freeh Group audit after new details were divulged a few weeks ago. First, WINK has reported that the four officers were subpoenaed to testify before a federal grand jury related to the investigation. None of the officers appeared, which is not surprising as any of their attorneys would have declined to allow them to testify under those circumstances. WINK spoke to Captain Perry’s attorney who said as much, and said that he could not let his client testify when he wasn’t sure any details of the investigation. It was mentioned that the officers received letters, which sounds like they may have been target letters: suggesting they were personally being investigated.

Second, that WINK article included an interview with former acting Chief Eads, who ran the department when the investigation got underway. Eads states that during his time in charge that he did not have any facts presented to him that were actionable. Ultimately, the four officers were suspended when the new chief received the Freeh Group report, and the redacted pages that still have not become public knowledge.

These reports, and those we discussed here before, suggest that the investigation of the officers is intertwined with the federal charges against accused drug trafficker Robert Ward, and to federal informants that were murdered. Ward is accused of murder for his involvement in the death of Kristopher Smith, and the murder of Victor Johnson appears to be related, as well. Detective Matt Sellers, the retired FMPD homicide detective, handled the investigation into the murder of Kristopher Smith. He went on WINK and stated that not only does he believe that the officers were not involved with that murder, but that he has also presented evidence that exonerates them to investigators. That means the Chief at the time, and the lead investigator, are both on record saying that they are unaware of any wrongdoing or connection between these officers and the Smith murder.

The city, the FBI, and other law enforcement agencies do not have to release information related to ongoing investigations. It may be years before the public finds out what was really going on at FMPD. The upcoming trial of Robert Ward, who is headed to federal court in Orlando may shed some light on why FMPD suspended the officers. Three of the officers have retired, but one remains on paid leave… three years after the suspensions were handed down. The leave for the officers has totaled over $200,000 and counting, and stands as an expensive unanswered question that even city leaders may be in the dark.

In other FMPD news, more details from the discovery in the case of former Captain Jay Rodriguez have been released. Also, it appears the state is considering additional charges for making a false report (no additional charges have been filed, it’s still in an investigation phase.) Rodriguez filed a report prior to release of the prostitution video that local activist Anthony Thomas tried to extort him for money or he would release the video. Thomas denies the extortion claim, which is now the basis for the false report allegation. Thomas later published the video on Facebook. The alleged extortion attempt supposedly took place when Thomas confronted Rodriguez outside a city council meeting, but there do not appear to be any witnesses. This type of charge is difficult to prove, because it is entirely he said/she said.

Finally, several FMPD officers are under investigation for an altercation that occurred off-duty at a Cape Coral bar the Dixie Roadhouse. Three officers have been placed on administrative leave pending the ongoing investigation. Apparently, the alleged victim was struck in the head with a beer bottle, and the incident was captured on video, which may become public down the road.

What Can be Done About the Unsolved Murders in Fort Myers?

An NBC-2 Investigative report yesterday examined the unsolved homicides, and discussed cases that have suspects, but that the State does not think there is enough evidence to pursue charges. It sounds like there is some finger pointing between FMPD and other members of the community and the State Attorney’s Office as to who is to blame here. I think the story doesn’t even get into the biggest issues.

The biggest issues are not the law enforcement disputes. Rather, it is:

We definitely need more murderers off the streets, but it’s not just an issue of the State not wanting to take chances… Mr. Russell points to the Zhi Huang case, where an arrest was made without SAO input, and a grand jury failed to indict the evidence was so lacking. And the greater problem with doing that is that if evidence comes up later implicating the person who was arrested, it may be too little too late due to double jeopardy. Fortunately, the State was later confident to charge Eugene Johnson in that recent case that initially suffered from a lack of evidence. It’s not right to point the finger at the State on cases where evidence is lacking, though more cooperation and communication may help solve the cases, and it could help prevent the aforementioned finger pointing.

The case that best encapsulates the greatest problem fighting violent crime in Fort Myers was the case of Andrew Faust Jr. Andrew was a five-year-old little boy who was shot in his home; an innocent killed by the wayward bullet of a drive-by shooting. After weeks without charges, a witness finally came forward and two men were charged in the case. However, the witness became uncooperative, and ultimately the charges had to be dropped. Since they were previously charged and speedy trial has run, they can never be charged again.

Here’s the thing about that case… the State did not handle as well as possible. While Mr. Russell is right when he tells NBC that we need to work with, support, and protect victims, his office tried to arrest the essential witness, the only person who could implicate the Defendants (after erroneously serving her sister with a subpoena). The attitude toward the witness likely contributed to her later uncooperativeness. It’s up to law enforcement at all levels, from the State Attorney to the street-level cop, to build up trust in the community, and to get the community to work together. Chief Diggs has already spoken about that need, and started outreach efforts to start building that trust. He said he didn’t know how bad it was before he got here and got to work, but it’s good to see him digging in. Hopefully he and the State Attorney, and the Sheriff, and all of the relevant agencies can work together to improve the problems in Fort Myers.

We’re all in it together! Community outreach like the efforts of Chief Diggs is the first step to reducing crime in Fort Myers, and we should all support those efforts.

After my last couple posts, I am glad to change it up with some positive news coming from law enforcement. The new Chief of FMPD held a couple of community engagement sessions for the purpose of building a relationship between the department and the community. Chief Derrick Diggs held two sessions today, and is holding another session tomorrow. I think he has his work cut out for him, but every journey begins with the first step. Ironically, the News-Press linked relates stories to this one, so as you read the article, there are linked headlines to stories about harassment, and persistent discrimination at the Department.

Chief Diggs is taking the first positive steps to develop a positive culture at FMPD, which is a building block to connecting with the community and hopefully addressing the violence that has become persistent.

Crimcourts would like to welcome and congratulate Derrick Diggs, who has just been named chief of FMPD. He previously capped his 37 years of law enforcement experience as chief of the Toledo, Ohio police department. The challenges are abundant, as Fort Myers has a major issue with violent crime, and there are issues regarding morale in the department. We hope that Chief Diggs is successful in reducing or eliminating these issues, and helping make Fort Myers a safer place to live.