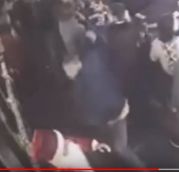 The scene: Cowboy Up Saloon, Fort Myers, Florida. Police are seeking information on a man who was caught on camera punching a Dancin’ Santa that was on display at the popular Cowboy Up Saloon downtown in the Fort Myers River District. A man standing at the bar suddenly turns, punches the Santa display to the ground, knocking off its head. The footage is shocking, except its just a robot, so nobody gets hurt!

It’s not the first attack we’ve had on a holiday icon in Fort Myers… several years ago the Easter Bunny was attacked at the Edison Mall. That character was played by a real person, who was fortunately ok. Um… I guess ‘don’t punch holiday characters’ needs to be said.

This is terrible… on December 23, a bunch of thieves broke into a not for profit outreach program, the Nation’s Association, and stole the presents they had compiled to give to children who aren’t going to have much of a Christmas. They even stole stockings and vandalized other decorations: a true Grinch (or Grinches).

Here’s the story from NBC-2.

Elf on a Selfie

New Jersey officers were called out to a suspicious vehicle in a Target parking lot. They found a man passed out inside, and he was dressed like the Elf on the Shelf. 23 year-old Brian Chellis performed poorly on Field Sobriety Exercises, and was arrested for DUI.

Reminds me of a client I represented a few years ago who played Santa Claus. The cop who arrested him admitted under oath that he was a “jolly” fellow. Somebody is getting a lump of coal this year.