Body Cams are Coming to the Charlotte County Sheriff’s Department

Crimcourts has long advocated for expanded use of body cams by law enforcement agencies. They have been added at some major departments in Southwest Florida with a great deal of success, including city police for Fort Myers, Cape Coral and Punta Gorda. The Charlotte County Sheriff’s Office has been working on instituting body worn cameras for it’s deputies, and with funding in place, expects to have them in use by the end of the summer. We applaud this effort by Sheriff Prummell and his department.

Not only do body cams provide for accountability for law enforcement, they also provide protection when there is an officer wrongly accused, as we’ve covered before on crimcourts. They can provide more evidence in cases, especially DUI cases that are very subjective. And when officers do violate rights, that can help lead to accountability, as we saw this week in Minneapolis. Another case seems to demonstrate the live risk of an officer where a body cam shows that a suspect who was shot was armed. While undoubtedly a tragedy, body worn cameras will help accurately determine the facts to resolve the investigation. As I’ve said in this space many times before, the pros far outweigh the cons.

We are glad to see CCSO is joining the ranks of camera wearing agencies, and encourage other agencies to do so, as well.

Making the Case for Body-Worn Cameras

I have repeatedly recommended the adoption of body-worn cameras for law enforcement. It’s a win-win situation. There’s never a problem of having too much evidence. Having active cameras can only help get to the truth for police-citizen encounters. The body cameras cut both ways, and do not favor a party who’s statement does not line up with the video… the video favors facts.

Body worn cameras would be beneficial in the recent Los Angeles shooting of Dijon Kizzee. L.A. deputies claim that he dropped a firearm and was picking it up when they shot him. However, they did not have body cameras. The only video was earlier by someone with a camera phone and that footage only shows Kizzee running away. We don’t know what happened that led up to the moment of the shooting, and if deputies had bodycams, that might have given us an answer. It certainly would be beneficial to the Sheriff’s Department if they had body cameras that showed Mr. Kizzee reaching for the weapon. Departments have resisted using body cameras when so often, when the officers are acting appropriately, the cameras would be for their protection. Admittedly, there are flaws: the cameras don’t catch everything, but that’s not a reason not to try to get video. 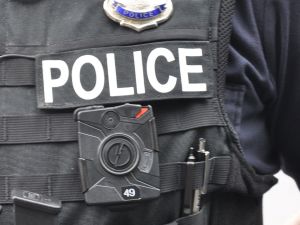 Sarasota is considering body cameras for their police force. One of the concerns is the expense. The Herald-Tribune ran this editorial last week, arguing that the cost is worth it to acquire body cams. The editorial also ran here in Fort Myers the other day- Fort Myers and Cape Coral do issue body cameras, though the Lee County Sheriff’s Office has not. The Charlotte County Sheriff has recently reconsidered his stance, and will now be seeking body cameras for his department. I applaud this decision and encourage other law enforcement agencies to join CCSO, FMPD, CCPD and many others in outfitting their officers with this important equipment.

Again, be sure to check out the editorial: https://www.heraldtribune.com/story/opinion/editorials/2020/09/15/police-use-force-can-lessened-body-cameras-if-done-right/5790554002/

As if Cape Coral did not have enough trouble with some of the bad warrants they had last year as a result of the Kordelle McKissack situation we helped uncover last year, you’d think they would have really buttoned down their warrant procedure. Alas, it was reported today that SWAT broke in the door of the apartment of a 78-year old little old lady, and they were at the wrong apartment. The last one cost them several cases, and no arrest was made this time… but it will likely cost them a lot of money. The woman has post-traumatic stress disorder, and is preparing a lawsuit.

The Department claims they were technically and procedurally correct. I disagree. If you break in the door for an innocent little old lady, you’re not just failing to achieve excellence. You are seriously doing something wrong. Let’s hope that this leads to better procedures to stop these things from happening. Unfortunately, the legal remedy is for them to be punished financially through a lawsuit. We all have to pay for their incompetence, but there must be a ramification so that these mistakes teach a lesson.

Man Convicted for Murder of his Father after Representing Himself 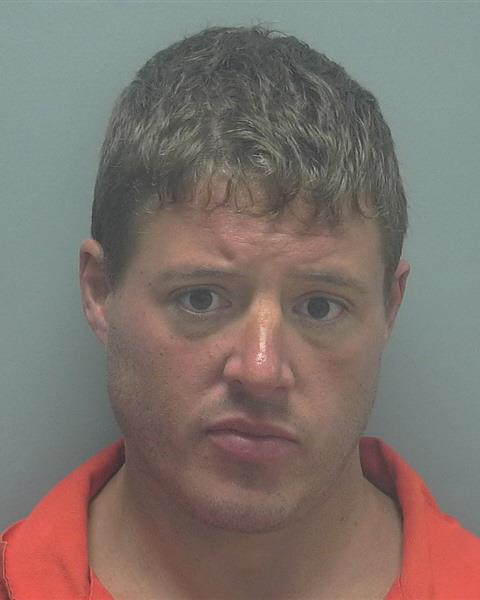 Matthew Marshall was found guilty by a jury this afternoon in the February murder of his father, James Marshall. They lived together in Cape Coral, before James was reported missing in February. His dismembered body was later found, and Matthew was found to have used his father’s credit card the day he disappeared.

Marshall decided to represent himself at trial, and did so, personally conducting jury selection, questioning and arguments. He contested that he had no motive, and that the state could not prove he had committed the offense. The strategy did not help, as the jury found him guilty of second degree murder, abuse of a body, and evidence tampering just a little while ago. He may want to use an attorney to assist him with the appeal, he is facing possible life in prison when he is sentenced Nov. 21.

Fox4 also ran a chilling exclusive interview with an Uber driver that gave Matthew Marshall a ride the night of the murder… all the more scarier now that he has been convicted of the offense.

A man drove into a house the other day in Cape Coral– police say he was under the influence of alcohol. Fortunately, nobody was home at the time, as the home sustained $50,000 in damages. The first officer on the scene was none other than interim Cape Coral Police Chief Dave Newlan. You’d think getting the big seat would have him off DUI duty, but when duty called, he responded. Turns out Newlan happened to be at a house nearby, and responded to the scene, detaining Gregory

Fischer until other officers arrived. Fischer was charged with a DUI with Damage.

This calls to mind an incident a few months back in Fort Myers, when interim FMPD Chief Dennis Eads also responded to a call. As they say, cops are always on duty!

My friend, Cameron Siggs, snapped this photo yesterday of an FMPD officer stopping traffic on 41 to allow mama duck and a dozen or so of her ducklings to safely cross the street. Kudos are in order to the patient motorists who waited for the duck family to cross and to do so safely. 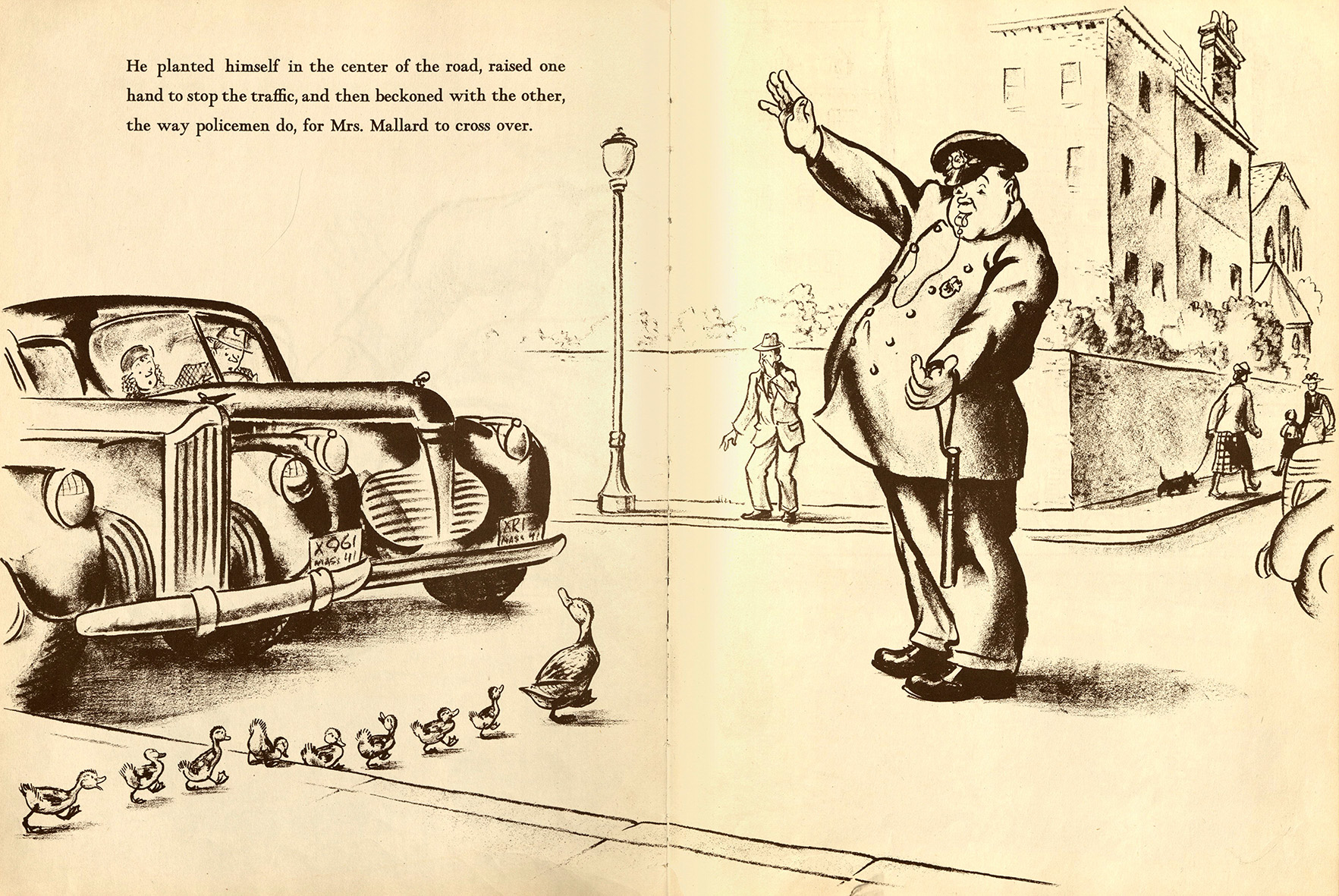 I love it, it’s a scene right of ‘Make Way for Ducklings’, the Caldecott-winning children’s book that recently celebrated its 75th anniversary.

We take for granted all the different things law enforcement are called upon to do. Just yesterday, CCSO escorted an aggregation of manatees, and CCPD recently shared this photo of Officer Keith Edinger helping a trapper remove a nuisance gator. Thank you all for your protection. 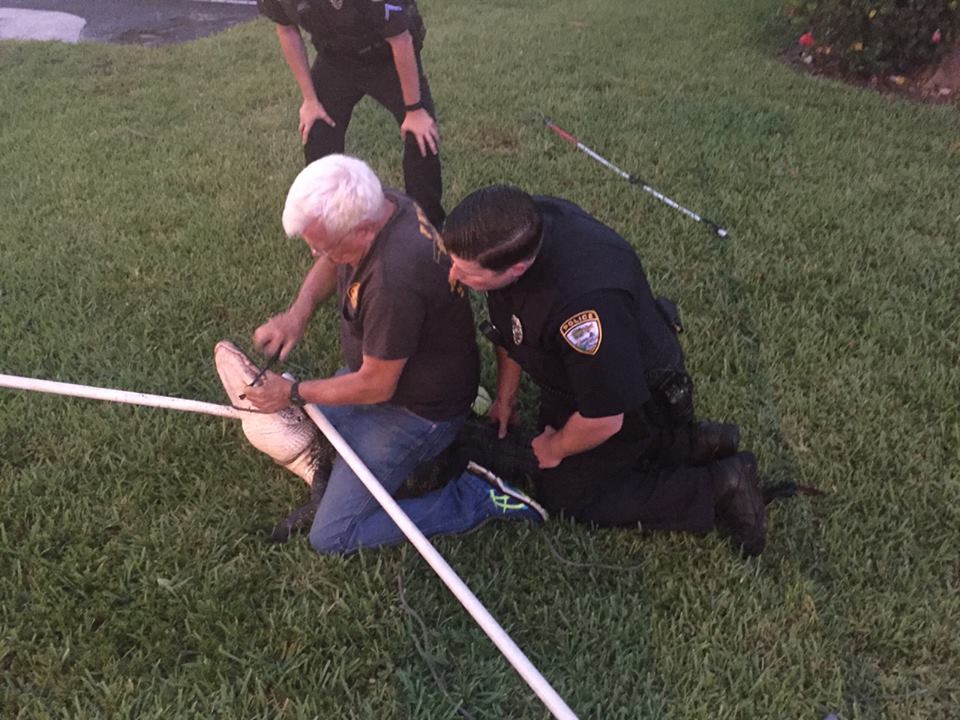 Social media, and citizen journalists, again demonstrate their importance to the system. After a social media post that depicted an officer throwing a woman to the ground, the Cape Coral Police Department has initiated an internal review, and put the officer involved on paid leave.

They have not yet ruled that his actions were unwarranted, but the video seems to demonstrate that he may have been more violent than necessary. There did not appear to be an immediate threat, and the officer did not even appear to identify himself before flinging her to the ground. It will be interesting to see what the brass says about this one…

It should be noted, the woman is clearly committing a battery by pushing and striking the man before the cop arrives, and would have also been subject to arrest for disorderly conduct.The issue is whether he handled the arrest appropriately. Kudos to the the Cape Coral PD for acting swiftly to address what will be a contentious issue.

So, It’s Illegal to RESCUE a Gator 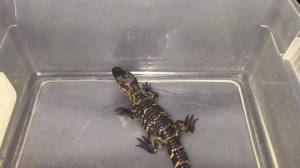 A couple of unnamed Cape residents saw a baby Alligator wandering in an intersection on Halloween night, and decided to rescue the little guy. It’s clearly a baby, as it is only a foot long, and still has its baby spots, which fade after a few years. The Samaritans scooped up the little guy, only to be stopped by CCPD before they could find a safe place to release it. It’s a crime to possess an Alligator in Florida! Fortunately, Officer Pinkham was sympathetic, and called in FWC to safely relocate the little guy, without charging the Samaritans. Yay, rescued gator!

Cape Coral announced they will be conducting another DUI enforcement operation on Saturday night. This is the sixth DUI enforcement by the Cape PD this year, and the third one since the start of July.

UPDATE: Four arrests were made during the operation.

2nd UPDATE: There were four arrests, only three were DUI, per CCPD release.

Some Officers are Buying Their Own Body Cams

Officer Kidder of New Richmond, Ohio, whose body cam showed his impressive restraint in not using deadly force in his confrontation with a murder suspect, was using his own body cam during the incident. It was apparently given to him by a family member. Apparently, there is a growing trend of officers wanting to have cameras to document their actions, even when the departments don’t provide it. It’s refreshing to see officers who believe in their work and are interested in honestly documenting their interactions.

Again, Crimcourts would encourage more law enforcement agencies to implement body cameras for the protection of the community, and the officers who are doing a good job. Fort Myers has started rolling them out, in spite of a short delay due to union complaints about camera policies, and Cape Coral is doing the same. Kudos to the Cities of Fort Myers and Cape Coral for taking the initiative to introduce body cameras.