Croc-wearing Crocodile Jumper Florida Man gets a Year in Jail 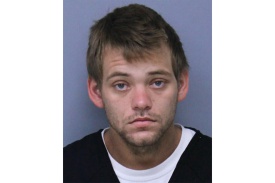 We introduced you to Brandon Hatfield a few months ago– the croc-wearing guy who jumped into a crocodile pit at a St. Augustine alligator park, and got bitten, was arrested after he was found almost-naked in a lady’s front yard. He got

sentenced last week, and he got dinged pretty good. Hatfield was sentenced to a year in jail, followed by 2 years of community control (similar to house arrest), in addition to being ordered to pay over $5000 in restitution for the damage he caused. He was charged with trespass and criminal mischief for the alligator park escapade, but he was already on probation for something else, which is probably why he got so much time in jail.

No animals were injured, but Hatfield nearly lost his foot after the incident. Apparently the whole escapade was due to his drug use, so hopefully this will serve as a wake-up call and he will get help for his substance-abuse issues. Court image via Beth Rousseau:

And in case you didn’t see the video, here’s a clip with highlights: