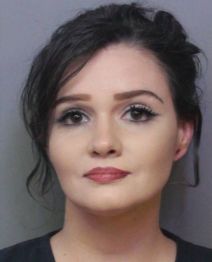 An exotic dancer from Lakeland, Florida was arrested last week for allegedly posting threats about a possible mass shooting online. Brein Basarich posted on Tumblr under the username “taking lives” that she was thinking about purchasing An AR-15 and had a “vision” of a bar or club with one way out and plans and firing that rifle into a crowd. Her name has also been reported as “Brien Basarich”, I’m not sure which one is correct.

This is a poor criminal case against her… the ‘threats’ that she posted probably do not qualify as threats under Florida law. While posting something on the internet is sufficient to satisfy the “written” element, generally threats must be pretty specific, and not just generalized talk about her “visions” or conditional claims that she could do something. She will say that musing about her fantasies is not a threat, and that she has a Constitutional right under the first amendment to write about her musings, even if they might be violent or unpleasant. That fist amendment protection does not extends to “true threats“, if this qualifies. Obviously law enforcement is sensitive to the through of a shooting at a club, especially so close to where the Pulse tragedy occurred, but they would likely need something more to sustain a prosecution than has been reported so far. Without that, the prosecutors may be forced to drop the charges. It will probably be a few weeks before the filing decision is made.