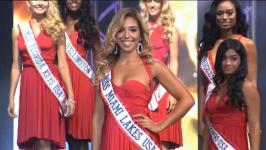 We previously covered the story of former Miss Hialeah and Miss Miami Lakes, Vanessa Barcelo. Barcelo was initially arrested for aggravated battery for threatening a man who refused to leave her party after causing a serious disturbance. The state determined that she did not strike anyone with the bat, but proceeded a misdemeanor battery charges as Ms. Barcelo slapped the man at the end of the altercation. After a 9-hour hearing, the court found that the man’s refusal to leave, and since he had taken the bat, meant her fear was justified, and dismissed the case under Florida’s Stand Your Ground law.

Now Barcelo is suing the cop and the Hialeah Police Department for the arrest, and for propagating the story that she beat hit the guy with a bat. While police are generally immune from suits, this suit alleges that the officer was grossly negligent, and relies on language in the stand your ground statute that compels police to investigate and determine whether there was justification for the force used. Working against the civil defendants is that Barcelo indicates the officer would not even take a statement from her, there were multiple witnesses who stated she had not struck him with the bat, and the alleged victim was drunk, and initiated the incident when he refused to leave her house when it appeared had had attempted to assault her cousin.

One of the less discussed aspects of the stand your ground law is that it is supposed to help prevent charges like the ones on Ms. Barcelo. It is explicit that officers are supposed to do a little more digging, and to be very sure that force was necessary before they make any arrests. They could be in trouble here, in light of the facts and the sloppy investigation. This is one of the rare circumstances where the cop and the police force may face consequences for their wrongful arrest.