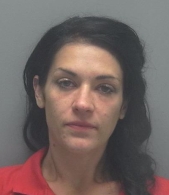 Lee County ran an undercover prostitution sting over the weekend and picked up a hooker… Brianna Hooker. There were 14 more arrests from the operation, in addition to Ms. Hooker. The undercover detective invited her to a location where he was staying, whereupon she agreed to have sex with him, then asked if she could smoke up before she performed for him. She has an extensive history of drugs and theft related offenses, and is facing drug possession charges as well as a violation of her earlier probation for this new charge. As is so often the case, the drug abuse likely led to the theft and prostitution as she tried to feed her addiction. That’s likely the case for several of the co-defendants from this operation.