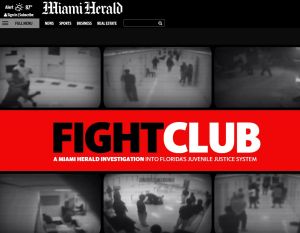 This week the Miami Herald dropped a bombshell on Florida’s juvenile justice system and the Department of Juvenile Justice. They spent two years researching the last 10 years of juvenile justice history to prepare a report they call “Fight Club.” It’s a devastating read.

The Herald found multiple instances of violence against juveniles. Some from the guards, and others from inmates, sometimes at the behest of guards who would reward them with Honey Buns or other items from the commissary. The article points to low pay, inadequate personnel screening and standards, and tolerance for cover-ups. Indeed, Time and again the Herald found that guards involved in the violence, including juvenile death, were not criminally charged (much like the adult guards in the CCI homicide a couple years back.)

One of the facilities highlighted was here in SW Florida, at the Fort Myers Youth Academy. The Herald says the Youth Academy is a microcosm, “steeped in violence and a culture of coercive cover-ups.” It details guards that were hired, even though they’d been fired from previous prison guard jobs for sexual harassment and bribery to hide abuse. It sounds like the troublemakers cited in the report no longer work there, but the account is troubling.

DJJ filed a lengthy response. Unfortunately, the lives lost by years of abuse cannot be brought back, but hopefully a true culture change can prevent such abuses in the future.

2 responses to “Murdered Children and ‘Honey Bun Hits’: A brutal look at Juvenile Corrections in Florida”