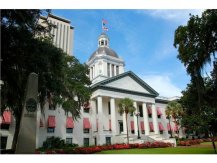 Florida effectively has no death penalty right now. First, the procedure that had been in effect for years was ruled unconstitutional by the U.S. Supreme Court, in the Hurst decision. Then, the legislature rushed through a new law to try to fix it, but the new law also failed to require a unanimous recommendation by the jury, and the Florida Supreme Court struck it down, as well. A new bill seeks to correct that shortcoming.